← Is The Publisher Killing The Author Or Is It Authorcide?
Next Post →

On February 11, 2012  we lost one of the GREATEST voices of our time. Whitney Houston passed away in a hotel room in California and the emotion spread across the nation like a tsunami wave.

Whitney was more than just a person, she was an icon. Her talent could, and still can’t, be matched and she will be sorely missed. I personally grew up listening to Whitney and can remember dancing around to I Wanna Dance With Somebody in my living room while

watching the video on Video Soul. From that to Where Do Broken Hearts Go, Whitney continued to take over our hearts and the airwaves and people wanted more. I will never forget the first time I heard The Greatest Love Of All that song to this day still gives me chills and a sense of the strength that I know I have inside and I have Whitney to thank for that. Whitney was the woman who gave The Star Spangled Banner a life that will NEVER die no matter how many times it is sang since her rendition. No autotune or a bunch of studio equipment needed only thing Clive required was that she showed up and turned out and that’s exactly what she always did.

Whitney’s tumultuous life has nothing to do with her untimely death. The fact of the matter is she’s gone way too soon. We all watched, sometime in awe, at the things she went through

but more importantly we cheered her on when she made her comeback and when she did she pulled NO punches and I wouldn’t expect anything less from her. I pray for her family and especially her daughter. We may have lost one of our favorite singers but she has lost her mother, her rock and I can only imagine the pain she is feeling right now. The same way everyone is rallying around Whitney’s memory I hope they will do the same for her daugher because she’s gonna need it now more than ever. I hate that it has taken her demise for her to be appreciate and uplifted in the manner she is now, perhaps maybe if she had been all along maybe we wouldn’t be here. Maybe I wouldn’t be writing this blog fighting tears as I listen to her music but we will never know.

I titled this blog after one of her songs “It’s Not Right But It’s Okay” because no, it’s not right that she’s gone but it’s okay because she is in God’s arms right now and at peace. She’s in Heaven with Michael Jackson, James Brown, Dorothy Dandridge and Phyllis Hyman. I mean can you imagine the concerts going on right now in the clouds? 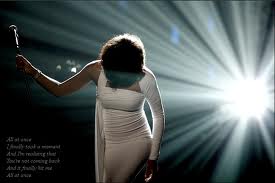 Whitney you will be missed and we all pray your soul is at rest but more importantly at peace. You are truly an angel now.

Writing is not just what I do, it's what I am.
View all posts by Author D.L.Sparks »

← Is The Publisher Killing The Author Or Is It Authorcide?
Next Post →